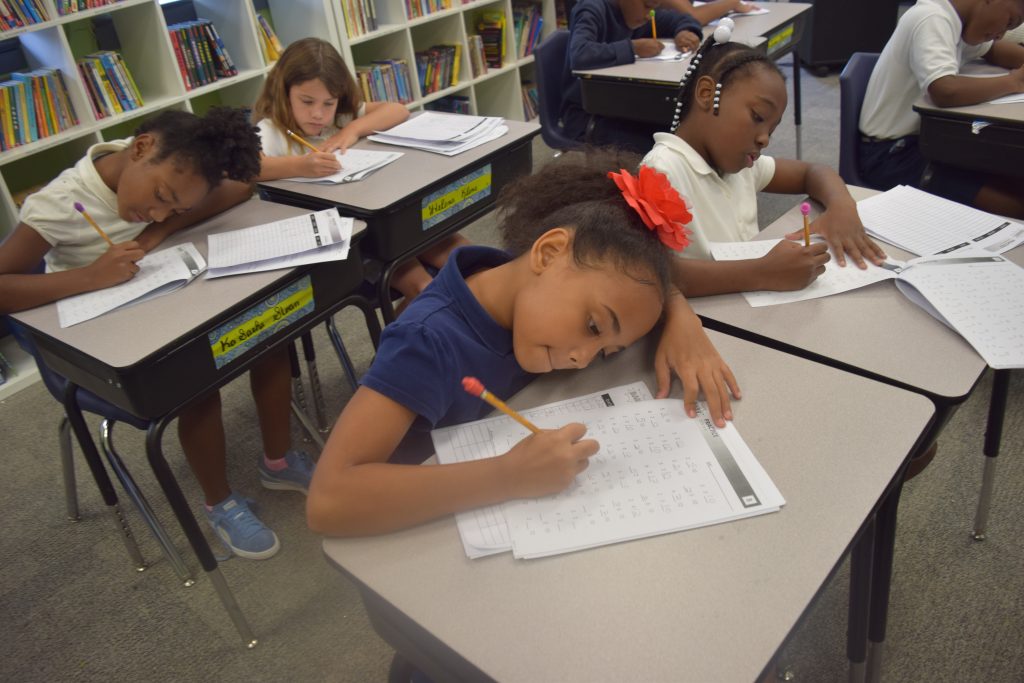 Wilmington —Douglass Academy students ranked as top performers among neighboring public schools according to the End-of-Grade testing results for the 2017-2018 school year. The test results were recently released by the North Carolina Department of Public Instruction and measure achievement on the state’s Common Core curriculum which is mandated for all state-run schools.

Douglass Academy in Wilmington is one of a family of four tuition-free charter schools managed by The Roger Bacon Academy. The schools include Douglass Academy in Wilmington, Charter Day School in Leland, South Brunswick Charter School in Southport, and Columbus Charter School in Whiteville. As charter schools, they are permitted to teach the family’s own classical curriculum with topics such as grammar, spelling, cursive, literature, history, traditional math, Latin, and other fundamental topics that have been largely abandoned in Common Core schools. However, the schools are required to administer the state’s Common Core tests to all their students.

“The test results show that students who come to Douglass in kindergarten and stay with the program can expect to be among the highest achievers in Wilmington and all of New Hanover County. That’s what we’re seeing in Brunswick and Columbus counties and that’s what will happen here,” explains Douglass Headmaster Nikki Chaney. “The fact that our students score highly on Common Core tests in spite of not being taught Common Core speaks volumes for the versatility and the timeless value of classical subjects. Coupling the classical curriculum with our caring classroom atmosphere makes a winning combination that effectively benefits every student,” Chaney added.

“Our responsibility is to teach your Kindergarten child to read before Easter. Being able to read in Kindergarten does wonders for your child’s self-confidence and eagerness to learn.,” said Teaching Coach Amanda Kelly. “With that foundation skill, your child can then be guided progressively to build skill upon skill to become a life-time independent learner,” she said.

Douglass Academy’s achievement score of tests passed, including a large number of transfer students, is 44% on the Common Core End-Of-Grade tests. For comparison, the three neighboring elementary schools—Rachel Freeman, Snipes Academy, and Gregory—reveal that 33%, 32%, and 48% of tests were passed, respectively. Douglass Academy also met its growth expectation and was the only one of the schools to make a “C” in reading. 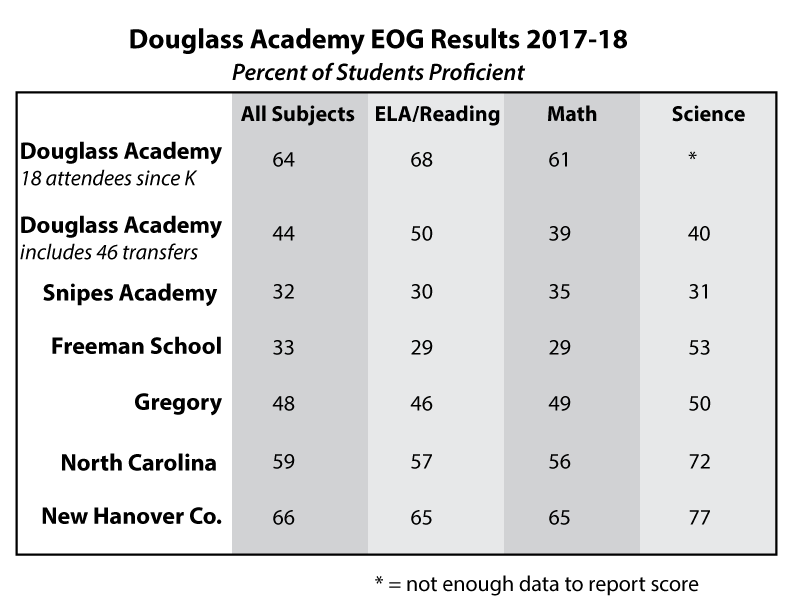 “Solomon loves going to school every morning,” reports parent David Gaskill. “He loves to learn, and Douglass Academy makes kids want to learn. The teachers are amazing,” he added.

Located in downtown Wilmington at 6th and Red Cross Streets, Douglass Academy is in its sixth year as a school of choice with its classical education for kindergarten through 5th grade. As a parent in North Carolina, you have the freedom to choose – tuition free – where your children are educated. Consider Douglass Academy – a caring charter school that draws nearly 150 students from the greater Wilmington community.

Douglass Academy is one of four charter schools managed by The Roger Bacon Academy, now in its 19th year. The Roger Bacon Academy was founded in 1999 by education pioneer Baker Mitchell to manage schools by providing a classical curriculum with traditional values. The North Carolina schools include Charter Day School in Leland, Douglass Academy in Wilmington, South Brunswick Charter School in Southport, and Columbus Charter School in Whiteville with a combined enrollment of over 2,100 students in K-8. Each school is a tuition-free charter school that welcomes all students, regardless of income, ability, or address. To learn more or enroll online, please visit EnrollRBA.com or www.douglassacademy.net.