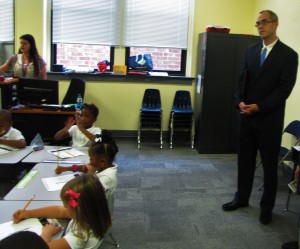 Wilmington- Friday, NC Office of Charter Schools Director, Joel Medley, visited Douglass Academy in downtown Wilmington. The visit accompanied a letter officially removing the public charter school from the Governance Cautionary Status under which it was placed last year for opening with fewer than the state mandated 65 students.

“(Douglass Academy) has met the condition of the statute related to enrollment and has been removed from the governance warning,” Medley stated. “They are meeting the needs of these children through their State Board of Education approved mission and education plan.”

Medley toured the campus, located in the historic Peabody Building, and noted the school’s extensive renovations and upgrades.

“The work that has been done to renovate the facility shows what can be done with the flexibility afforded to charter schools in the law,” he remarked.

Ferrante explained that this educational model was the same used at Charter Day School, in Leland, which outscored both Brunswick and New Hanover Counties on End-of–Grade tests, and Columbus Charter School, in Whiteville, which was the highest scoring school in Columbus County on End-of-Grade tests.

“I am quite pleased with the education I see being delivered to the students at Douglass Academy,” Medley offered.

Parent Rochelle Fleming echoes Medley’s sentiment, stating that, “I chose Douglass because of the structure, how the school is run, the learning, how the environment is set up—the whole thing. I can see already that my children have gotten back up to where they need to be learning-wise. They’re excited to learn again.”

The public, tuition-free charter school will expand to serve grades K-5 by 2017 and open enrollment for the 2015-16 school year begins in January at www.douglassacademy.net